Peace and justice initiative in Cameroon 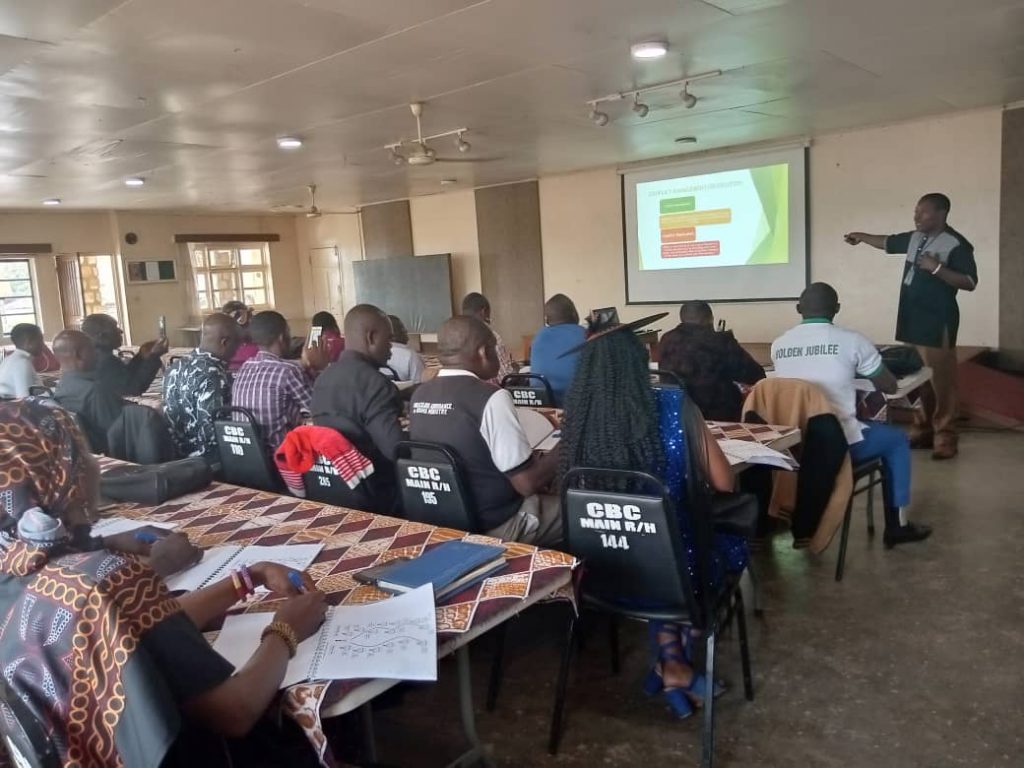 I thank God and API leadership for the gracious opportunity to be part of the API 2021 online training. I successfully took three courses: Introduction to Conflict Transformation, Peace Club Theory and Practice, and Good Governance and Leadership.

Background on peace and justice initiative

In January 2022, I had an opportunity to use my newly gained knowledge. Firstly, I taught Conflict Management to 14 Bachelor and Masters’ students of the Cameroon Baptist Theological Seminary. Subsequently, I helped form the Peace and Justice Initiative (PJI) of the Cameroon Baptist Convention (CBC). Then, we held the CBC’s first-ever seminar on “The Role of the Church in Conflict Transformation and Peacebuilding”.

Peace and Justice Initiative (PJI) is a new ministry of the Cameroon Baptist Convention Crisis Relief Committee. I prepared a concept note and presented it to the Committee on February 8, 2022. Because of API, I advocated for a ministry that will intentionally work at transforming conflicts in the church and society. Upon approval, PJI began with myself, Reverend George Vimensi Minang, as its Coordinator.

Born out of necessity, PJI’s mandate is to equip the Church to effectively respond to conflicts inside and outside its walls. PJI trains peacebuilders who will then transform conflicts and create a culture of peace in their homes, churches and communities. This we will do through direct interventions and capacity building. There is still more we need to do to grow this ministry. Furthermore, due to the ongoing violent conflict in the Anglophone regions of Cameroon, many conflicts persist in society.

The Republic of Cameroon is a bilingual nation with a colonial past in French and British colonization. The French and British colonies gained independence in 1960 and 1961, respectively. After that, they turned into a federation of two equal states and, finally, a unitary state in 1972. The anglophone minority of the northwest and southwest regions complain of marginalization from the majority francophone community. In 2016, anglophone teachers and lawyers conducted peaceful strikes and demonstrations. They protested government’s attempts to remove anglophone education and legal systems.

The government responded with violent crackdowns. In return, some of the anglophone leaders re-declared their independence in October 2017, creating the Republic of Ambazonia (formerly British Southern Cameroons). This caused a violent armed conflict that is worsening even today. Thousands have died and entire villages have burnt down. Cameroon has thousands of Internally Displaced Persons (IDPs) and even more refugees in Nigeria. Increased insecurity and violence, kidnappings, rape, etc. traumatizes the civilian population.

On April 22, 2022, PJI organized its first seminar on “The Role of the Church in Conflict Transformation and Peacebuilding”. There were 27 participants of the CBC (14 Pastors and 13 lay leaders) in this one-day training. Presentations were built using API materials, for example, Conflict Transformation, Good Governance and Peace Clubs manuals one and four. Two seminary students from my January class co-facilitated with me. Assessments and follow-up trainings will be done with this first batch of PJI trainees.

The one-day seminar was mind-transforming. As a result, I see Conflict Transformation from a different perspective. Before the seminar, my focus was on the socio-political stalemate between the two anglophone parts of the country. However, as the program ensued, I realized the rich knowledge could apply to every sphere of my life, family, church and society. I applaud the choice of facilitators; moreover, their presentations were impeccable. I say this as someone who has attended many seminars on peacebuilding and conflict transformation. With their spirits high, CBC is sure of creating LASTING impact on the population.

The seminar gave me the training that all my life, and at the expense of all my treasures, I could never afford. I am not only informed but reformed. As a teacher, a middle-born child in my family, and above all a Christian charged with the task of leading others to reconciliation, I was ignorant for so long. Often, I used the wrong ways of dealing with conflicts, for example, by avoiding conflict. I left the seminar with a new perspective about conflict management and transformation. Now, I have the courage and skills to approach conflicts that may arise among my children, siblings, colleagues, etc. I will confront the situation rather than remain silent and allow it to escalate. In summary, I recognize conflicts as opportunities for ministry.

I used it last Sunday in church; in short, I’m blessed. People were amazed at how their minds were opened to see how conflict could be dealt with without aggravating it.

I have used the knowledge to finish a problem that I have been struggling with for 2 years.